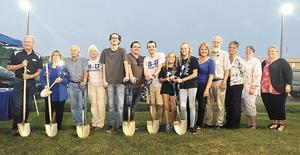 BUCKHANNON — For the first three years of his high school soccer career, Matt McCoy played defense — although he would rather have been playing offense.

But he did it to help his team at Buckhannon-Upshur High School because that is where they needed him.

The Woody family is now honoring McCoy’s memory by filling a long-time need — a concession complex that will also house public restrooms for the Ted Crites Alumni Field at Tom Hasbrouck Stadium.

McCoy graduated fourth in his class from B-UHS in 2016 and had completed his freshman year at West Virginia University, majoring in philosophy with plans to become an attorney. On June 15, 2017, he died after falling from a cliff in California while on vacation.

On Thursday, between the boys and girls soccer games, a groundbreaking ceremony was held to honor McCoy.

A statement was provided by the family: “The family of Matt McCoy would first like to thank the community for their continued love and support since Matt’s untimely death in June 2017. Matt was a bright light in a flawed world. He never knew a stranger and always showed kindness and acceptance to everyone he met.

“Most of you here tonight know that Matt was a member of the B-U High School boys soccer team. Matt was a strong player who concentrated more on his team’s success than his own successes. He took the younger players under his wing and encouraged them to fly.

“Matt always wanted to play offense, but his team needed him as a defender. So that is where he played his first three years of high school career. It did bother him. He complained to us, but he played every game where the team needed him and congratulated all the other players who were playing where he most wanted to be.”

Despite not wanting the position, McCoy earned Defensive Player of the Year awards for his team in those years. He was a four-year letterman in soccer and received the academic award all four years. In his junior year, McCoy received honorable mention All State, and in his senior year he made First Team All State and Second Team All Big 10.

“But again, the most important thing to Matt was his team’s success,” the statement continued. “He was most proud that his team won sectionals and advanced to regional play all four years.”

In an essay that McCoy penned in December 2011, he wrote, “Soccer is one of the most predominant things in my life. I’ve always had a love for the game. I made a lot of friends and soccer made us who we are. It was a big part of all of our lives. It created bonds nothing could ever break.”

The statement continued, “Matt’s family has had a deep desire to make sure that Matt is remembered for who he was and the great things he did in his life. They knew what they had to do; they needed to do something for the soccer community, especially the high school teams. That realization than took on a life of its own with the idea of building a much needed concession complex. Building this concession complex will provide future soccer players, their families and all who support the soccer teams, a much more enjoyable experience which were two of Matt’s favorite things — soccer and having fun with family and friends. We know that Matt is smiling down on all of us here tonight for honoring his love for the game and his love for his soccer family.”

The building will be constructed by TKS Contracting and work is expected to commence in the spring, according to an earlier story.